It is hard to believe that my time in Ecuador for my initial two-year commitment is drawing to a close. I will be returning to the States on July 19 in order to participate in the Mennonite World Conference, and in the following couple months I will speak in several churches in Iowa and Indiana, and Anabaptist Mennonite Biblical Seminary about the ministry in Ecuador. 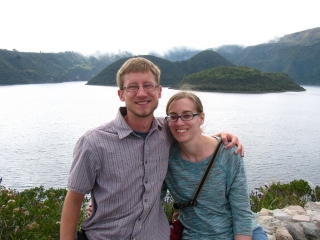 In the meantime, a lot has happened since I last wrote! Most significantly Beth Swartzendruber and I got engaged on April 28. Beth came to Ecuador for a two week visit at the end of April, after almost 6 months of physical separation. Beth has been a major support as we have talked every day via Skype. We are excited about building a future together with God’s leading for us both, as we will soon join our lives to one another, when we get married in October in Iowa. While I will be saying goodbye to Ecuador for at least awhile, we are discerning returning to serve with the Quito Mennonite church as a couple. 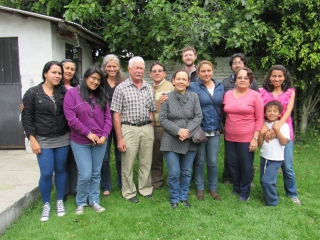 As coordinator of the ProPaz program for leadership training, it was exciting to witness Jerrell and Jane Ross Richer’s class entitled Love of neighbor: Creation and Economic Justice. This was an intensive course with great participation for members of the Quito church and visiting Methodists. The course focused on several different indigenous communities with whom Jerrell and Jane have had personal encounter asking what it looks like to love these neighbors, who are marginalized by the industrialized society we participate in. We learned that there are different forms of capital, including environmental and social capital. Communities that lack financial capital may have other valuable types of “capital” that we lack in the United States.

We have also continued with a Bible workshop every month, with the same group of participants. The most recent topics were on an overview of the Old Testament, Genesis 1-12, and the Exodus event, as the program moves through the important moments the biblical story. The idea is for these monthly workshops to continue once a month even when I am not here, until finishing the year-long series. Thankfully Luis Tapia, pastor at the Quito church will be able to continue coordinating the ProPaz program after I leave. 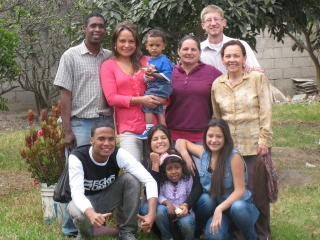 My work in Calderón has continued fairly normally, though there continues to be changes in the families that are present in Calderon. Another family has returned to Colombia, so our numbers are even more reduced. I have enjoyed working with Maria Helena and learned much from her. With the church council of the Quito church, we recently decided to consider Calderón as a cell group rather than a church plant, recognizing that most of the families are not here long term. Our goal has been to accompany the families that are here, as long as they are here, inviting all to deeper faith and to be formed by Christ-like love. Since a number of us work with refugees families that may carry trauma from experiences of violence, Paul Stucky and Nathan Toews came from MCC Colombia to offer a needed retreat for a few days in April. We had a similar retreat right when I arrived, and this time second time I had the benefit of bringing experiences of working with families with stress or trauma. 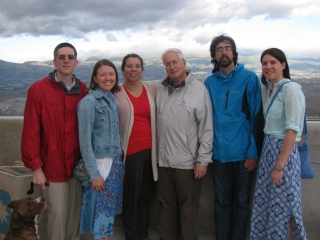 A recent highlight for me was receiving the Ditzler family here in Calderón. They have been life-long friends. Paquita is from Ecuador, but this is their first visit to Ecuador as a family in quite a few years.