I have now passed the six-month mark since I arrived in Ecuador on October 14 of last year. I have had a few transitions since the last time I wrote, and my routine is busier even though it involves much of the same work as before.

One of these transitions is the departure of César and Patricia from work in Ecuador, although they remain as denominational coordinators until the end of this year. Luis Tapia is now pastor at the church in Quito and has become a good friend. We have a plan to read the same theological essays (in English) and discuss them as Luis wants to refine his English. 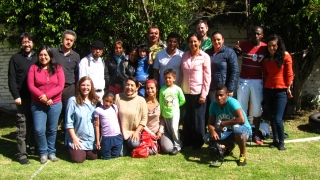 I have just finished teaching the first upper-level ProPaz course of the year, on how to study the Bible. There were a total of eight students enrolled in this course, and it focused on some practical methods for reading biblical texts, finding orientation for pastoral problems when the community reads Biblical texts, and an introduction to formal exegetical methods. This weekend a second upper-level class on theology in Anabaptist perspective began taught by Luis. We also have had two congregational workshops on worship and community pastoral accompaniment.

no images were found

On March 23, the church plant in Calderón celebrated its first anniversary. In order to celebrate we had a joint service at my house with everyone barely fitting. However, we have had a lot of transition since that date. Tatiana who was instrumental in the start of the plant in Calderón decided to withdraw from her leadership responsibilities. So I have been pastoral coordinator alone. This has meant increased preaching responsibility, and coordination of activities, but I have stepped up to the challenge. The folks that meet in Calderon continue to have motivation to be a church in spite of the changes that have occurred. This does mean, however, that other than an elderly Ecuadorian couple that continues their involvement, the remaining families are Colombians seeking refuge in Ecuador, a fact that continues to define the character of the group.

I appreciate the support of relationships here and abroad, and the occasional opportunity to get away as when some of us went to a beautiful lake within a volcanic crater. I relate to the words of one of our hymns, of which I share an excerpt:

In the midst of life you are present O God,
nearer than my own breath, the sustenance of my being.
You rush the blood through my veins at every heartbeat,
You move my heart with the rhythm of life.

You are at work in the field and the city.
The bustle of each day is a hymn to life.
The hammer-blow and the keyboard stroke
make out their praise to the God of creation.

You are in the moments of joy and pain,
you share with the people the struggle for good.
You have come in Christ to redeem life,
to remake the world as a pledge of your kingdom.