The start of a new year means it is time to update on what I have been up to. I have continued the activities that I mentioned in the last post. I have preached quite a bit over the past month or so, including once in the Quito church because of the pastors’ absence. I expect I will preach less often as soon as I have things to do with Propaz. Along with that my routine has been to make visits with members of the Calderon church. Whether the visit is social or becomes more pastoral is something I play by ear. The Christmas season was particularly difficult for families who were outside of Colombia for the first time for the holidays and couldn’t see friends and relatives back home. However, they had their own celebrations here with each other. 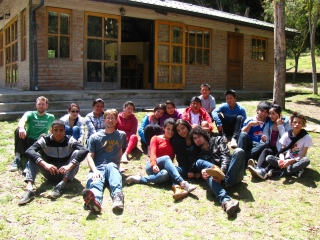 I finished my first course with the Propaz program. This was a New Testament Greek course that is considered the equivalent of 2 university credits and lasted four weeks, with three people completing all the requirements. This was not the course I expected to start out teaching but it was fun. I slowed down the pace a lot as there were some absences. One student commented that even if we didn’t get so far what we did cover was solid.
We had a youth retreat just before the Christmas service on the 20-21st of December. This was with young people from all three churches near Quito. The retreat was held at the same location where we had the STAR retreat. There were some complaints about it being cold, no pool, beforehand, but no one complained about being cold while there even though it was chilly. Highlights were Capture the flag that night (the terrain gave one side a huge advantage however), a bonfire, a speaker following day, and Minute to Win it challenges. 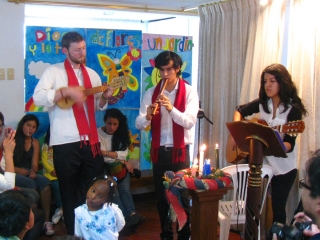 The retreat ended Saturday and Sunday was a joint Christmas service. I was in the Christmas choir which sang three songs, there was a drama about Mary’s revolutionary side (see the Magnificat) and we especially enjoyed music by David Shenk, Juan Moya and Andrea Moya (charango, flute, guitar). Then there was a delicious Christmas meal afterwards.

I was able to spend time with a few friends from abroad during the end of December. Bruce and Edie and Laura from my home church were in the country to visit a friend and we spent an afternoon in the historical section of Quito. I also had a day with Israel and Paquita Ditzler the following week, with Paquita’s parents and aunt. Most significantly, my girlfriend Beth came down for a week from the 24th to the 31st (flights were cheaper those days). We didn’t go very far, but still saw a lot of sights around Quito, including the cable car up the Pinchincha volcano, a train ride to the south of the city amid other volcanoes, the attractions at the Equator, and the museum of Ecuadorian painter Guayasamín.

If you happened to be in Quito on the 31st of December, you might wonder why the streets are filled with cross-dressers. This is in fact a New Year’s tradition. As a way of “grieving” everything that was bad about the old year, young men dress up as widows (often quite provocative widows without much black on) and stop cars dancing in front of them in order to ask for coins. The other major tradition is to buy large “dolls” (something like oversized piñatas intended to be filled with firecrackers). They are burned at midnight. In Colombia they basically function as effigies (politicians or bad soccer players), but since in Quito, quite a few of the “dolls” available for sale on the street were cartoon characters or popular icons like el Chavo del Ocho they clearly are not functioning as effigies.

Once again I appreciate the support and prayers I receive from so many people, including comments and best wishes people have left.

2 thoughts on “Beginning a New Year”